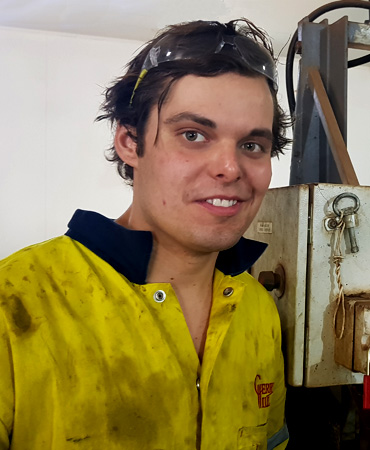 In April 2018, we were lucky enough to have Jordan Stephens join us, on a casual basis, to help out around the business. It wasn’t long before ‘Stevo’ (as he is known to mates) was soon impressing us with his welding skills and engineering knowledge, so we offered him an apprenticeship.

Jordan is Cherry Hill’s very first apprentice and will be spending four years under Darren Nicholls’ wing, training to be a Fitter and Turner and looking after the machine maintenance at Cherry Hill. Originally from Mildura and growing up on an asparagus farm, he has roots with the land (yes, pun intended). Jordan had trained as a butcher and worked in this trade for four and half years. He then worked at a company engineering robots to build and supply rehab equipment to hospitals.

Growing up, Jordan wanted to be a diesel mechanic and now he’s reconnecting with this passion. We are excited to see Jordan grow into his new role and are looking forward to his fresh ideas and zest for life, making a positive difference at Cherry Hill Coolstores.

We create a quarterly newsletter to keep you updated on what's been going on. We'd love you to subscribe and keep in touch.