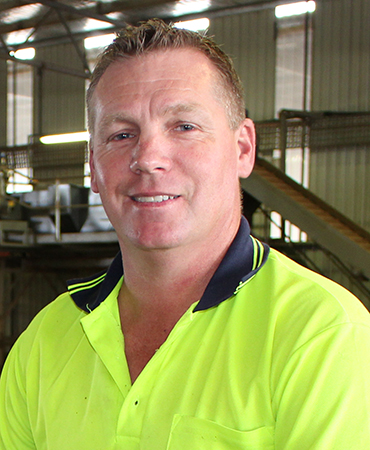 Jason or “Richo” as he’s often referred is a local lad having grown up in East Devonport and joined us in December 2015 as our Factory/Coolstore worker.

Jason’s background is in construction and, as a qualified solid plasterer and tiler has spent from 1990-2015 in this industry, prior to needing a change. Although agriculture is a totally different business from what he is used to, Jason is comfortable and confident in this new role. Now living in Wesley Vale, he is surrounded by country people and the way of life. His brother-in-law even grows spuds!

We’re keeping him busy with maintenance, checking and mending our 11,000 1 tonne boxes but as the seasons’ change, so does Jason’s role – he’s also responsible for unloading and storage, and whatever else Wayne throws his way.

Footy keeps Jason fit and takes up most of his spare time outside of work. It’s also how we met Jason – he’s President of the Wesley Vale Football club! Jason plays either up forward or in the middle.

We create a quarterly newsletter to keep you updated on what's been going on. We'd love you to subscribe and keep in touch.